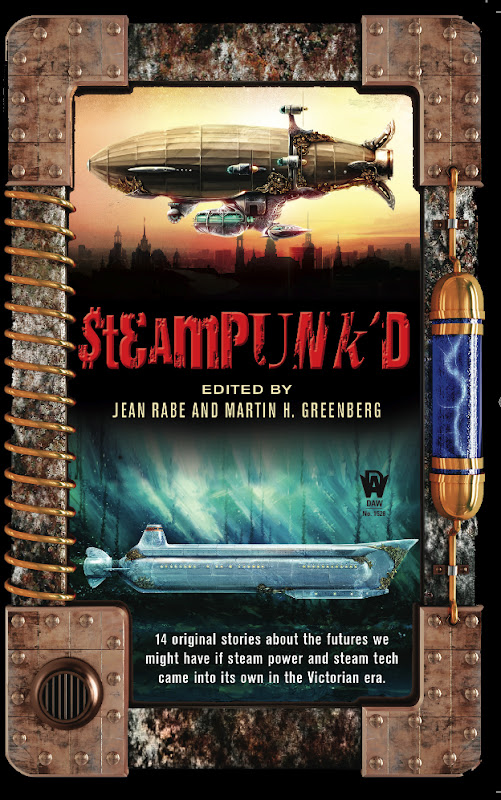 Steampunk'd is the new anthology from DAW Books and releases November 2, 2010 and features my story, The Nubian Queen.

Read the first half of the story for free on my website in the Works section, or listen to a free podcast here: http://web.me.com/paulgenesse/Site/Podcast/Entries/2010/10/27_The_Steampunk’d_Anthology_from_DAW_Books.html

The podcast is pretty awesome. It's read by Annie O'Connell-Torgersen, who is an acclaimed voice over artist and a friend. She's married to Brad Torgersen, a sci-fi writer and a Writers of the Future winner.

Annie happens to be perfect to play the role of Queen Sahdi and I knew that from the moment I met her. You see, Annie and Sahdi are both strong black women.


In The Nubian Queen, the last descendent of Cleopatra the Great must risk everything to save her country in an 1800’s alternate history Earth where Egypt is the center of the world.

Check out the book on Amazon.com.


Science fiction is the literature of what if, and steampunk takes the what if along a particular time stream. What if steam power was the prime force in the Victorian era? How would that era change, and how would it change the future?

From a Franco-British race for Kentucky coal to one woman’s determination to let no man come between her and her inventions . . . from an attempt to turn lead into gold which has far-reaching implications to a reporter’s cross-country airship journey to cover the story of a scientist out to tame the desert’s heat . . . from the hunt for a near-extinct creature to an attempt to rid Europe of the fey . . . from “machine whispers” to a Thomas Edison experiment gone awry, here are fourteen original tales of what might have been had steam powered the world in an earlier age.


This is a crazy book and the purposefully amateurish cover drew the ire of a many when it came out. Those who hated the cover may have missed the point all together of this mostly comedic exploration on two hilarious ideas: zombie raccoons and killer bunnies. If you’re looking for some spooky fun during Halloween you’ll find a lot of entertainment here, from hilarious to scary. There’s fifteen stories and the authors cover a lot of different ground.

Death Mask by Jody Lynn Nye has written a tale about some nefarious raccoons and a tough old lady with a shotgun that you won’t soon forget. BunRabs by Donald J. Bingle is the funniest story in the book and I laughed out loud several times. For Lizzie by Anton Strout explores a couple of secondary characters from his well received Simon Canderous novels (Dead to Me, Dead Matter, Deader Still, & Dead Waters). Faith in Our Fathers by Alexander B. Potter is one of the best stories in the book and it really tugs at your heart. It has a resonance that any of us who have ever lost a pet can identify with, and is written with the grace of a master.

Bone Whispers by Tim Waggoner is a Stephen King-esque horror story that comes to life and will totally creep you out. Bone Whispers is one of those bizarre and well-written stories that makes you cringe. Watching by Carrie Vaughn is a tale about pigeons and mind control that will have you watching those damn flying rats out of the corner of your eye for some time.

The Things That Crawl by Richard Lee Byers is in my top three of the anthology. It’s one of those awesome stories that has it all, creepiness, a hurricane, great characterization, murder, and it’s an awesome story about the kind of serial killer you’ve never heard of before. Dead Poets by John A. Pitts is the most literary of the anthology and is written in an interesting point of view with a liberal dose of poetry. Her Black Mood by Brenda Cooper is an exploration of a unique fairy world by a neglected young girl.

Ninja Rats on Harleys by Elizabeth A. Vaughan is such an incredibly amusing story about a writer and her new friend, Wan, a very unique mouse who would be utterly bad-ass if he weren’t three inches tall. This is the continuation of Vaughan’s story about Wan from the anthology, Furry Fantastic and even if you haven’t read the first one, you’ll love this one. I mean, who doesn’t like ninja rats on Harleys?

Bats in thebayou (not a typo) by Steven H. Silver is one of the most interesting science fiction stories I’ve read a long time and one of the best stories in the book. It’s about a breed of aliens that look like bats. They’ve secretly invaded Earth and have come up with a scheme to harvest the most valuable thing on the planet, mosquitoes, without anyone knowing about it. Twilight Animals by the award-winning Nini Kiriki Hoffman is about a slacker who discovers a terrible secret about the possums infesting a suburban neighborhood where he’s house sitting. The final tale in the book titled, The Ridges by Larry D. Sweazy is a great story that will keep you guessing until the end.

Overall, Zombie Raccoons and Killer Bunnies was rollicking good time about creepy animals that infest the dark and often funny corners of our twisted imaginations. It’s a perfect collection of stories for Halloween time.

Posted by Paul Genesse at 2:33 AM No comments: