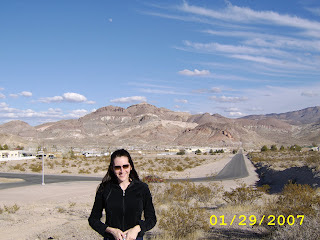 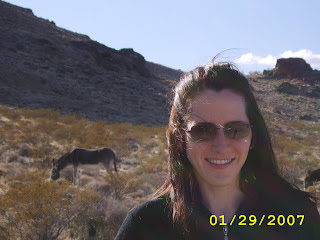 Seeing my mom and so many old friends was the best part. And the air was clean, not polluted like it is here in Salt Lake City. And it was so warm, in the 60's. Beatty was a great place to grow up and I think living there made me stronger. I don't know when I'll go back again and soon my mom is going to move here to Salt Lake.
Going home has made me want to get in touch with my friends from high school and see how they're doing. Reestablishing connections feels very important to me now. Bye for now and let me know if you've gone back home like me and had similar experiences.
Posted by Paul Genesse at 3:31 PM 1 comment:

I'm going back to my home town in a week. I'll be speaking at the high school's career day. I'll be talking about becoming a nurse and a writer. It'll be lots of fun to see some old friends, mainly Natalie Tobin (now Kobinski as she got married) and Jordan Stephens. My home town is Beatty, Nevada. It's in the middle of nowhere--literally. Beatty is two hours north of Las Vegas and is right beside Death Valley, on the Nevada/California border. My graduating class was 32 kids.
The high school is about the same size as it was in 1992 when I graduated, about 150 kids.

My mom still lives there and it'll good to see her. Mom's cooking is so good!

I have so many memories of high school and some aren't great, but going through the adversity I had made me stronger now.

It seems like a lifetime ago when I was in high school. I guess 15 years is a decent amount of time. I've been back home since then, but this time it feels different. I'll let you know how it all goes. I'm just excited to see my English teacher, Richard Stephens and to visit my friends.

Connecting to the people in my past seems so important to me right now.
Posted by Paul Genesse at 7:48 PM 1 comment:

I love starting a new year. You can clear out the old and start fresh. All things seem possible and guess what? They are. I just watched a cool movie called The Secret. Check out www.thesecret.tv to check it out. The whole thing is about manifesting what you want. I've studied this concept in the past and have seen it work many times. The idea is that if you think about something you want, you can cause it to happen. I'll let the movie make the whole case for it working, but do yourself a favor and check it out. The $4.95 fee to watch it as a streaming video is well worth it.