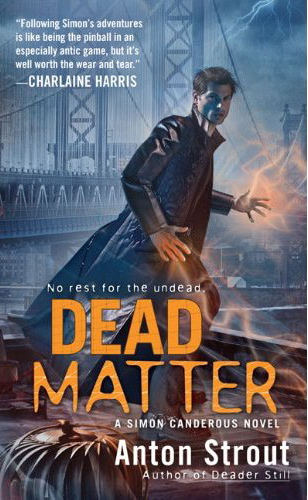 Dead Matter, the third book in the Simon Canderous urban fantasy series went on sale today, February 23rd, 2010. The first two books were great fun and I know this one will be just as crazy. I love the Charlaine Harris quote on the cover.

Something is seriously awry in psychometrist Simon Canderous' life when even sacred taco night comes under supernatural fire. Strout's good-hearted, bat-carrying hero is once again faced with extraordinary peril from both bureaucratic paperwork and things that go bump in the night. His skillful blending of the creepy and the wacky give his series an original appeal. Don't miss out!
4.5 stars- Romantic Times Top Pick

I just ordered my copy on Amazon.com. Where else do you buy undead?

Paul Genesse
Author of The Dragon Hunters
www.paulgenesse.com
Posted by Paul Genesse at 9:35 AM 1 comment:


I was a guest at LTUE, a fantastic writing symposium on science-fiction and fantasy yesterday. It’s been held at BYU in Provo, Utah for the past 28 years, and is still going strong. It’s my favorite conference by far and I really had a great time yesterday. I was on four panels and they went really well. Seeing my writer friends and some of my fans was great too. It’s free and is going today, Friday Feb. 12 and tomorrow Feb 13. Swing by, the parking is free as well . . .

This panel was really good, and not just because I was the moderator. (grin) Brandon Sanderson, the author of the new Wheel of Time books, was excellent and very informative. We talked a lot about George R.R. Martin’s Song of Ice and Fire books, which are amazing, and there is almost no magic in them. Fantasy without magic is so cool and I’ve written one story like that, the lead story in DAW Books’ Fellowship Fantastic anthology, titled, Almost Brothers. It’s my homage to George R.R. Martin and I hope to write a novel based on that story someday.

Another great panel and we covered this topic extremely well in my humble opinion. I spoke about various things, and also mentioned the wizard in my Iron Dragon books, Dabarius, who is very unlike any other wizard I’ve read about. He’s a martial artist and is physically stronger and taller than any one else in the group. Dabarius is a ladies man with a “live for the moment philosophy.” He’s young, powerful, and incorporates his magic into his martial arts. Overall, he’s a bad-ass wizard, and the opposite of the white-bearded wise old man type that we’ve seen too much. He first appears in book two, The Dragon Hunters.


I had lunch with Tom Carr and his friend Doug. Tom is the founder of Wasatch Paranormal, a ghost hunting group in Utah. Tom is a great guy and recently wrote his first book. I’m so proud of him. I also learned about his invitation by a famous film producer to go to the Atlantic Ocean and do a ghost hunt on the water above the wreck of The Titanic. Then they’re going to investigate the cemetery where most of the bodies were buried in Nova Scotia (I think Nova Scotia). Anyway, Tom is one of the best ghost hunters in American and was chosen to be part of this really interesting project. I’m planning on going with him on a ghost hunt in March. I went once before and it was really fascinating.

Five strong female authors and me, the moderator. We had a good panel and covered the topic pretty well, giving the large crowd a lot of good tips on how to create a strong female character—and characters in general. I got to talk about my latest strong female character, Queen Sahdi in the story The Nubian Queen, an alternate history steampunk story that should be coming out from DAW Books. I picture Queen Sahdi as looking like Tyra Banks, but having Oprah’s force of will. She’s awesome.

4:00 PM
No More Dead Dogs (or moms): Why do mothers and dogs always die in children's literature? How do we pull at the heartstrings and give child characters independence without killing off dogs and moms? (Paul Genesse, Stacy Whitman, Clint Johnson, Julie Wright)

This was the best panel of the day that I was a part of. We had such a good time, and kept the crowd laughing and entertained just about the entire time. Stacy Whitman was a good moderator and her editorial experience is fabulous. She’s heading to New York soon as her publishing company is taking off. Congrats to Stacy!! Anyway, another panelist, Clint Johnson needs to write a book about writing. He is so smart and eloquent on panels—plus he fills the air with cogent remarks that are so applicable to improving your writing. It’s always a treat to be on a panel with him. Julie Wright was witty and brilliant as we explored this interesting topic and gave ideas on why you should try to leave the character’s parents alive, and should (almost never!) kill the dogs. I did admit to killing a dog in a short story once, and of course I admitted to tormenting the two dogs that accompany my main character in my Iron Dragon Series. I’ve had so many fans tell me how much they loved the dogs in my books, and they’ve threatened me to never kill the dogs. We’ll see what happens . . .

Posted by Paul Genesse at 6:01 AM No comments:


Things are good with me, and I hope you’re doing well. My blog has more, but drop me a line if you get a chance. Thanks to those of you who came to see me at Authorpalooza (40 local authors were there!) last Saturday at the South Towne Barnes and Noble in Sandy. Dinner afterwards was fun, and if anyone wants to get together for dinner/lunch this week after my events, let me know.

My next event is at the free symposium on fantasy and science fiction called: Life, The Universe, and Everything (http://ltue.org/LTUE2010.html), at BYU this Thursday and Friday, February 11 and 12. (I won’t be there on Saturday). My signing is on Friday at 12:00 at the BYU Bookstore. The schedule is below and on my blog—I’ll be on four panels on Thursday, none on Friday.

Then I’ll be at the Salt Lake City Library on Saturday Feb. 13, which is hosting a panel discussion with me, and two awesome authors, Sara Zarr (highly acclaimed author of Story of a Girl; Sweethearts; and Once Was Lost) and Bobbie Pyron (author of The Ring and A Dog’s Way Home). The event will be on Saturday, February 13 from 1:00-2:30 PM in the teen services area. We’re going to discuss the books we love and hate, answer questions, mingle, then do a signing. Sara and Bobbie are cool ladies, so drop by if you’re able and meet them, or go to their websites:


I hope to hear from you, or see you soon.

Author of The Dragon Hunters
Book Two of the Iron Dragon Series
(Five Star Books, May 2009)

Join me on Facebook, www.facebook.com
Editor of the Writer's Symposium Ezine
www.paulgenesse.com/writerssymposiumezine 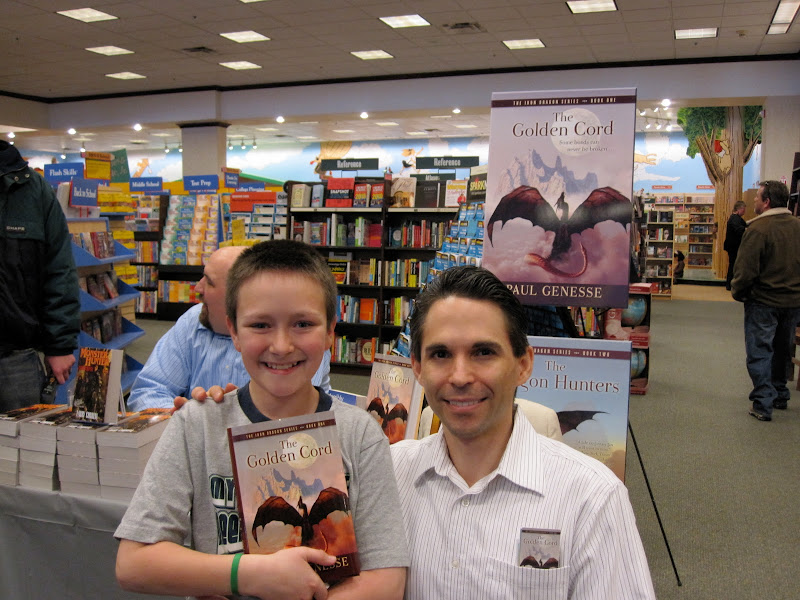 That's me with Josh, a great kid I met at an Elementary School a while back. He came to my signing with his family. I have such cool fans.


So, today was Authorpalooza at the South Towne Mall Barnes and Noble in Sandy, Utah. There were 40 local Utah authors in the store! It was crazy fun.

I was signing books with my buddy, Larry Correia, author of Monster Hunter International. He's a great writer and his book was my favorite of 2009 (see my review on this blog). It was an honor to sign with him and we got to go out to dinner afterward with our writer pal, Dan Willis.

In other news, I finished my alternate history steampunk story, The Nubian Queen, and sent it off to my editor. Now I'm going to write a short story for a different anthology. The story is going to be about orcs.

Then I'll get back to writing novels.

Next week I'll be at Life, The Universe, and Everything at BYU on Thursday and Friday, then on Saturday, I have an event at the Salt Lake City library downtown from 1-3.

Busy times, but it's been lots of fun.

Paul Genesse
Author of The Dragon Hunters
www.paulgenesse.com
Posted by Paul Genesse at 7:35 PM No comments: