Review: of Blood and Honey by Stina Leicht 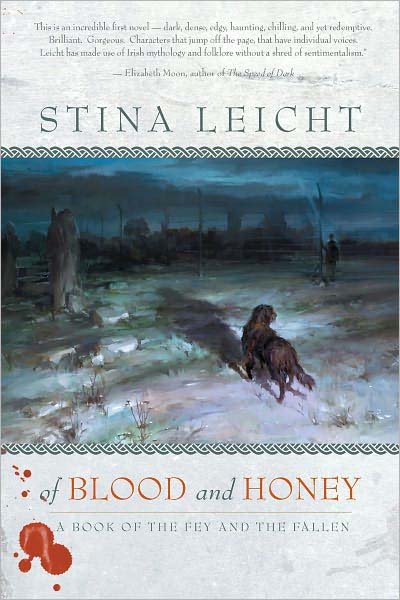 This first novel in the Fey and the Fallen series, of Blood and Honey, had my attention from the start and kept me fascinated the whole way through. Campbell award nominee, Stina Leicht’s debut novel is brilliantly crafted, fast-paced, and completely engrossing. It’s a very dark urban fantasy about a young Irishman, Liam, growing up in the 60’s and 70’s in Northern Ireland, mainly Derry and Belfast, as the fight between the Protestants and Catholics heats up. The historical backdrop is intriguing, and so different from most urban fantasies I’ve read. The unique historical setting is a huge plus for the book, but it is first and foremost a character driven novel, mainly about Liam.

Of Blood and Honey doesn’t get bogged down in the details about what’s going on in the wider war or the historical context, but history buffs will enjoy the brief mentions of important events and historical figures for sure, though it’s never done to excess. If you want to know more about the history that Ms. Leicht is referencing, she provides an excellent list of books in the acknowledgements section.

The book focuses on the main character, Liam who is trying to find his way in the world and has a tough home life with a jerk of a stepfather. You feel bad for Liam as he does not know who his real father is and that is a huge part of the novel. The truth about his parentage is revealed slowly and we learn that his father, Bran is one of the fey, and Liam has inherited at least some of his father’s dark gifts. This exploration of what Liam is, he has no idea for what feels like eighty percent of the book, is very well done. It kept me wondering and reading. If you like your fiction spoon-fed into your brain and everything explained in exact detail, this is not the book for you. If you prefer realistic, subtle and nuanced fiction, this novel is damn near perfect.

I love books like this that don’t tell too much. I find them much more believable than novels who go into extreme detail about everything and leave little unsaid between the characters. Details can be great, but the mystery keeps me interested and reading onward. Too much explanation actually hurts my suspension of disbelief, and makes a lot of the fantasy elements seem ridiculous, and this book is serious and believable at every turn.

One nitpicky issue: I don’t like the cover that much. It’s a great scene, well painted and on topic as it conveys the right mood, but it’s too dark for my tastes and I think this book deserved a rock star cover. The image for book two is similarly dark, which I suppose is a warning to the readers out there about what to expect in this series, but I wanted images that would POP more.

Moving on . . . The biggest strength of the book: The way Leicht handles the interactions between the characters. The dialogue and the characters’ actual actions are particularly awesome and so realistic. My favorite were the scenes with Liam and his paramour, a strong female character named Mary Kate, who is quite politically minded and wants to be a lawyer. Liam is very strong himself, but he has trouble reading, and is constantly fighting the literal monster within him that is trying to get out and wreak havoc. He’s a tortured hero and his experiences change him over the course of the book a lot. Mary Kate has her own war going during this book and her actions cause a lot of trouble for the both of them.

The other major character is Father Murray, a somewhat hippie Catholic Priest who has a keen interest in young Liam’s supernatural lineage, and the secret war between the Catholic church and the fallen angels who are terrorizing the world. The fey have gotten lumped into the fallen angel category and the Church has been killing them for centuries, not realizing the error of their ways. Of course Father Murray has many secrets and keeps Liam in the dark for most of the book, not telling him what is really going on to the detriment of Liam, really.

The final major character is Liam’s mother, Katherine. She and Father Murray work together to help Liam, though the young man does not feel their assistance is helpful at all, and I would completely agree. You have to be honest with people at some point and Father Murray waited on this until a very bad moment to come clean.

I enjoyed the journey of Liam as he dealt with all the chaos of living in Belfast during the “Time of Troubles” and devoured this book reading it only a few days. It’s stuck with me for some time and that is a mark of a great book. I admit that I had to put it down a few times when certain gut-wrenching events occurred. I’m tough, but I want to warn the squeamish readers that this book might not be for you. There are several scenes of torture and extreme abuse. I think four times I had to put the book down for a few minutes as I recoiled in horror at what was happening, or what had just happened to a beloved character. Of course I couldn’t help myself and went right back to reading after a few minutes and powered ahead as I had to find out what happened next.

The plot and the overall idea of the secret war going on actually reminds me of The Crimson Pact anthology series that I am the editor of, where demons have infested our world (actually many different worlds) and a group of hunters are fighting them. In a way, of Blood and Honey fits perfectly in with the Crimson Pact core idea, which is another reason I loved this book so much.

There were so many twists and turns in of Blood and Honey and it kept me guessing right up to the ending. I’m very excited because I own book two, And Blue Skies from Pain, which continues this novel in a big way. There is so much more to be explored and I trust that the war between the fey and the fallen angels will get more page time in book two and subsequent novels. View it on Amazon.

Paul Genesse
Author of the Iron Dragon Series and Editor of The Crimson Pact series
Posted by Paul Genesse at 2:31 AM No comments: 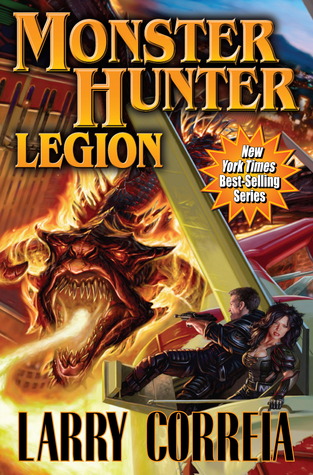 I just backed an awesome kickstarter that will fund a fun role-playing game, the Monster Hunter International Employee Handbook by Hero Games. I'm a huge fan of the novels and am so excited with the idea of playing in the world Larry Correia created. Check out the video and the link.

Check out the kickstarter site here:

I went in big and will be getting a signed and numbered book if it ends up getting funded, but even small amounts will help out a lot. I'm also excited to read Larry Correia's new book, Monster Hunter Legion, which just came out.

Paul Genesse
Author of the Iron Dragon Series
Posted by Paul Genesse at 5:57 PM No comments: