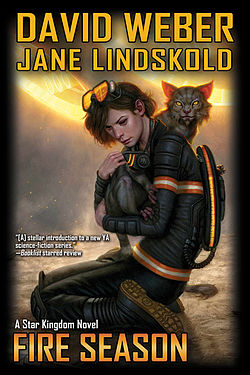 This is the second novel about Stephanie Harrington and her treecat companion, Lionheart, set on the fascinating treecat home world. I hadn’t read the award winning first book, A Beautiful Friendship by David Weber, and came to this novel as I’m a fan of author Jane Lindskold’s short fiction and her novels (Through Wolf’s Eyes, Thirteen Orphans). You don’t need to read the first book in this series, A Beautiful Friendship, to understand this one, as I was never lost, but I’m sure it would be good to start at the beginning. 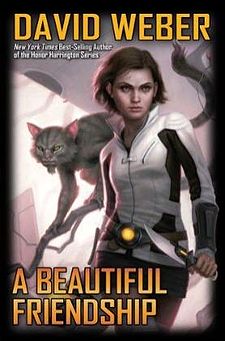 A Beautiful Friendship on Amazon


If you’re a reader of David Weber’s Honor Harrington novels, I think you’ll enjoy this prequel novel series. Fire Season is set a few hundred years before Honor was born, and this is not a space opera with lots of the big battles Mr. Weber is famous for. It’s a coming of age novel, mostly written to appeal to teenaged readers (12 and older), about a brilliant young woman growing up on an alien planet, who just happens to be the first person to ever bond with a treecat. The telepathic, empathic, six-legged (hexapedal) catlike creatures with long tails—two of their six legs have actual hands on them—are the stars of the book.

I found the most fascinating aspect of Fire Season to be the relationship between fifteen-year-old Stephanie and the treecat who adopted her. Lionheart is what Stephanie calls him, but his true name among the People (the treecats think of themselves as The People), is Climbs Quickly.

The treecats are telepathic with each other and empathic with humans, so communicating with humans is quite difficult for them, though they can read human emotions very easily and affect them in some minor ways. The treecats think that humans make all sorts of funny mouth sounds, use hand gestures, and isn’t it sad they can’t speak to each other with their minds and have to rely on such poor communication methods?

It was hilarious and awesome when two treecats were communicating telepathically with each other and one treecat noted how well the human (Stephanie Harrington) had been trained by Climbs Quickly. The big question in this book is if the treecats are intelligent enough to be considered sentient by the human scientists.

Climbs Quickly can read Stephanie’s emotions and enjoys her “mind-glow” very much. I loved reading the chapters from Climb’s Quickly’s point of view, and it was fascinating how the human scientists are trying to determine if the treecats are a sentient race, while the treecats are trying to understand if they should avoid the humans who have come to their world, or if they should interact with them more.

The book has the feel of an un-contacted tribe of native Americans first coming into contact with a highly civilized group of Europeans. That would be Europeans who are not trying to enslave or destroy them. What a concept. There are a lot of great messages in this book that will get younger and older readers thinking.

Fire Season is naturally set during the dry season when forest fires often rage across the mostly tree-covered world. Stephanie Harrington, and her big brother friend Karl, are provisional rangers with the forestry service, and they participate in watching out for fires and sometimes fighting them, and of course rescuing animals caught in the path of the flames.

Much of the book is dedicated to Stephanie becoming an adult. She has to learn to interact with kids her own age, a very difficult thing for a genius introvert, and of course deal with her well-meaning but socially clumsy parents. I think teens will easily connect with Stephanie, as she’s a very well drawn character.

I highly recommend this book to teen animal lovers—especially young women—and to fans of the Honor Harrington series who want to see where the treecats came from. This is a good starting point for younger readers, and I think this would be a great gift to a friend or relative that you wanted to expose to science fiction. It kept my interest throughout, had a good conclusion that wrapped up nicely, and I’m excited to read the sequel, Treecat Wars.

View it on Amazon: Fire Season by David Weber and Jane Lindskold
Highly Recommended, 4.5 out of 5 Stars