Review of Warbound by Larry Correia (no spoilers) 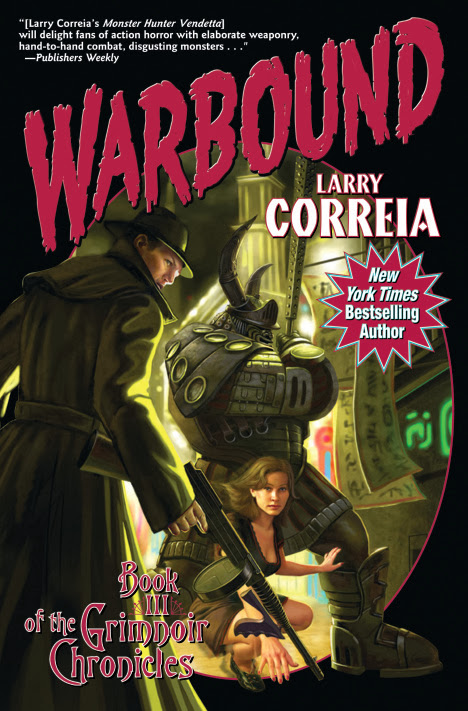 The Grimnoir Chronicles by New York Times’ bestselling author Larry Correia is a fantastic series. I just read book three, Warbound, which concludes the story arc started with Hard Magic (Book I), and Spellbound (Book II). The world is an alternate history Earth set mostly in the 1930’s, and is a cross between X-Men and Boardwalk Empire. That’s right, superheroes and gangsters in the 1930’s fighting for the fate of the planet. It’s epic and awesome. I must mention there are airships, pirates, and ninjas—as well as a hick girl from Oklahoma who is possibly the most powerful magic-wielding person of all time. You find out why in book three.

Warbound mostly features a trio of main characters—pictured on the cover: Faye Vierra—the hick girl with the power of teleportation (she’s called a Traveler) who is likely the best assassin ever; Jake Sullivan—a World War I veteran who can manipulate gravity (he’s called a Heavy); and Tokugawa Toru, a samurai (he’s a Brute) who can change the density of matter). Toru is such a great character and he just might be the equal of Sullivan. Toru wields a nasty war club (a tetsubo) and just might end up wearing a suit of really amazing armor. (Hint: the cover artist did a wonderful job). Toru can cause things to weigh almost nothing, which is good for him, and really bad for his enemies as he can swing his tetsubo really fast.

There is so much action in this series and Warbound was off the charts with magic and mayhem. The story arc concludes in Warbound, but I’ve heard rumors there will be at least one prequel, perhaps two, set several years before Hard Magic, likely set during World War I. There will also be at least one short story set in the Grimnoir world featured in one of the many anthologies Larry Correia has on his impressive release schedule.


Warbound delivered on the promises of the first two exceptional novels and tied up all the loose threads, while delivering a bullet-riddled and exciting ending filled with all sorts of wizardry. The characters are a lot of fun and the plot was fast-paced as it barreled toward the final confrontation. The only thing I didn’t like was that President Franklin Roosevelt was cast as a villain along with much of the U.S. government. Correia does have some justification, as it is true that Roosevelt committed a terrible crime and interned thousands of Japanese Americans during World War II—but I found some early parts of the book a little too heavy handed.

Regardless of my own bias, I found myself engaged and inside this book on many levels. The characters and the story pulled me in. I was so intrigued with how the magic unfolded as well, and all the questions brought up in books one and two were answered. The connections made by the characters and the sheer magnitude of the Enemy coming to destroy the world amped up the tension throughout.

I’m a big fan of Correia’s writing and his Grimnoir books are amazing. The audio versions of all three are also quite exceptional. Spellbound won a prestigious Audie Award in 2013 and all three books feature the same narrator, the brilliant voice actor, Bronson Pinchot. Paperbacks of the first two books are out now—as of Sept. 2013, and if you’re an audio book fan, download them now. All of Grimnoir books are available as Kindle eBooks, though you might want to collect a hard cover while they’re still available.

Check out my review of book one, Hard Magic, for more details about this series.

Paul Genesse
Author of The Iron Dragon Series
Editor of The Crimson Pact Series
Posted by Paul Genesse at 1:46 AM

I read your guest post on Emma' s blog and came over to check yours out. I appreciate that you approach steampunk from a whole world history perspective. I loom forward to exploring your work!

Thanks Eal, I hope you enjoy my work. Try my free story, The Cost of a Tasmanian Tiger.

I also read your guest post on Emma's blog. I do love the social and blog world that has introduced me to so many new-to-me authors. I look forward to reading STEAMPUNK'D and CLOCKWORK UNIVERSE.
I concur with your thoughts on 'Dracula' on NBC, too. I was hesitant to look forward to it, I didn't want to be disappointed. So glad I was incorrect. It's superb. I like the premise since Dracula is supposed to be evil, but he's going against the big bad in his own way. Love the effects and the look of his power plant.

Thanks for your comment. I appreciate your support and thanks for reading.

Dracula on NBC is so much fun. If you like the character of Dracula, check out my free story, The Cost of a Tasmanian Tiger, which may feature a couple of iconic characters, possibly Dracula. (wink)