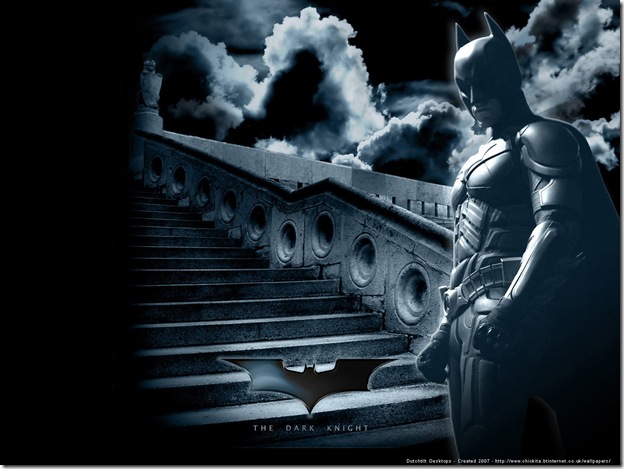 I just saw the new Batman movie, The Dark Knight, on IMAX. The film was exceptional. The reviews are right. Heath Ledger was spectacular as the Joker. He deserves a posthumous Oscar for this one. The whole film was tense and scary and tough to watch at times. The terrorism aspect of it was unnerving and I admit that I didn't have a great feeling after watching the movie, but it was a piece of powerful film-making. The director did a grand job. He wrote it also, and I think he's a great writer.

The movie is really a tragedy, though one could argue that point. Overall, I think the movie was true to the feeling of the Dark Knight comic books, which I've read a few of. Christian Bale was amazing again as Batman. The only strange choice was casting Maggie Gyllenhaal. I love her and think she's great, but this didn't seem to be the right movie for her. My favorite scene was when the guy you think will make a certain choice makes an unexpected one. The scene involves a window and an object getting tossed through it. If you saw the movie, you know it's at the end of the film. Cool, eh?

In other news, I managed to get to 40% of the rewrite of The Dragon Hunters last week. I'm doing good, but I always want to be further ahead. I also got word that the book is tentatively coming out in November of 2009--which came with the advance check yesterday.

Yep, lunch was on me today. I was interviewed by Rich Rogers, a book reviewer for a newspaper called The Independent, in Southern Utah/St. George. Getting to hang out with Rich was fun and we could talk forever.

Okay, know I must get to work on The Dragon Hunters.

Author of The Golden Cord, Book One of the Iron Dragon Series