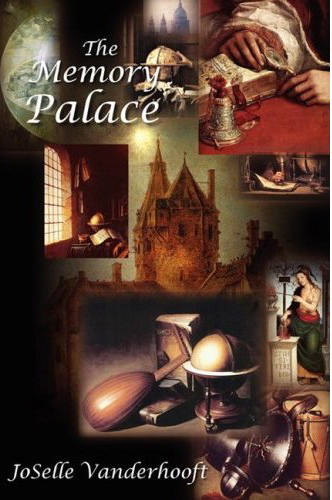 I just read the poetry memoir of the bravest woman I know. The book is The Memory Palace, by JoSelle Vanderhooft. I’ve known JoSelle for a few years now and consider her a friend, as well as an incredibly gifted writer and poet. She’s had much critical acclaim and was recently nominated for a Stoker award.

She’s the real deal. Have no doubt.

The Memory Palace is so strong that it would have blown me away regardless if I knew the author or not, and was worth every penny of the twelve dollars I spent on it.

The first four poems, all in free verse, Entering the Memory Palace, Too Many Birthdays, Colorado, and Inheritance just blew my mind. She knocked the ball out of the park, got a standing ovation, and sucked me in like she had pulled me into the deep end of the pool and tied a bag of sledge hammers to my legs.

This is her life-story told with poems so engaging you’ll probably read the whole 161 page book in one sitting. I did.

You want to find out what happens next and I was captivated by her brutal honesty, and the poignant glimpses into the soul of the strange-looking kid nearly everyone picked on.

It takes a really tough guy to pick on the weird girl in the playground, terrorizing her physically and mentally all through their school years. The same assholes who did that are in jail now, or have turned their aggression to their wives or poor children—who will in turn probably keep the cycle going. We are sick and twisted maniacs to target the most vulnerable among us. And we call them crazy?

None of the idiotic muscle heads who now dig ditches for a living can even compete with the bravery JoSelle showed by writing this book and then putting it out there for everyone to read. Baring your soul to complete strangers takes tremendous courage and I applaud her for doing that.

She might be a bisexual lapsed Catholic with emotional problems, but she has balls of pure steel, and the determination to reach for her dreams no matter what tragedy or challenge befalls her. It’s never easy for her, but why should it be? Life sucks sometimes, but do you let it grind you into dust or do you become mud and stick to life’s boots? Like the rest of us, JoSelle does a little of both.

I would like to think that if I was there during the bad times in her youth, she would have been my friend and I would have stood at her side. Making someone an outcast doesn’t solve any problems.

The Memory Palace is a collection of life’s worst and best moments written down by an extremely talented writer and playwright. This is a memoir with love, hate, acne, frizzy hair, and lots of fear. Sound familiar?

The story of her life is mine now, and no one will read it exactly like I did. There is little doubt in my mind that when you finish reading, the work will simmer in your veins like it’s simmering in mine now.