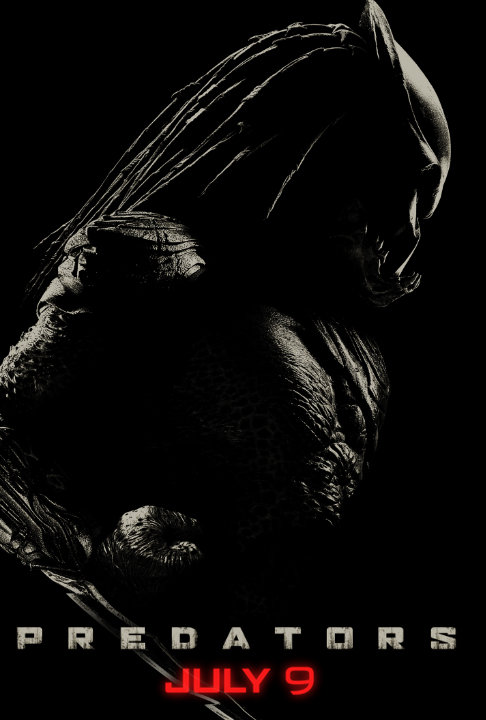 Here’s my written review of the new Predators movie, which I’ll be reviewing live on K-Talk 630 AM on the Sector Five radio show (9PM-11PM) on Saturday, July 10. The radio station wants me to become an on-air movie reviewer and Saturday we'll be talking about my books and stories. Check out http://sectorfiveradio.com/

The hunters are back.

I just watched the new Predators movie at a 12:01 AM showing in my local theater. I give it three and a half out of five stars, a solid B+ grade film. I admit, it was a lot of fun to watch the film with friends and relive some of the feelings I had when I watched the first Predator movie back in 1987, when I was 14. If you liked that movie, you’ll like this one—though you’ll miss Arnold, one of his best movies. Ever since seeing the original I wanted to know more about the predators. Who are they? Where do they come from? To answer those questions I read every Predator (and Aliens) book. Yes, the universes do cross over, in case you didn’t know. You’ll learn more about them in this movie and there are is a new twist that will send the franchise in another direction.

Aliens vs. Predator: Prey, by Steve and Stefani Perry is the best book in the franchise. Read it. Trust me. You’ll get to learn a lot about the predators, and there are scenes from their point of view. It’s still available even though it came out in 1994, and don’t worry, it’s not the Alien vs. Predator movie that came out in 2004.

The new Predators movie brings us back to the jungle, though not on Earth. A motley crew of bad-asses is brought to an alien planet and hunted by high technology alien predators with plasma-type weapons, wrist-swords and cloaking technology. The opening of the movie is pretty awesome, but then it gets a little weird as the characters come together and figure out what’s going on. The dialogue is pretty over the top, and strangely enough, this horror movie has major action comedy aspects. It’s got all the cheesy action lines with the obligatory F-word in practically every line—which I mostly loved. The dialogue was supposed to be funny, as far as I can tell . . . (The producer, Robert Rodriquez made Sin City, Desperado, From Dusk Till Dawn, and Grindhouse, after all).

The movie (directed by Nimrod Antal, who is from Hungary) is fast-paced with seriously kick ass characters shooting big guns and blowing stuff up. It’s a man-flick and don’t drag your soft-hearted girlfriend or wife to the theater. Take your video game playing, beer drinking, guy friends and enjoy the carnage. One friend did tell me that it wasn’t gory enough for him, though I think it was pretty gory, especially the spine/skull removal scene.

You also might be put off by the lead character, Royce, played by the Academy Award winning actor Adrien Brody. I watched an interview and Brody said he was pitched another role in the film (that did not appear in the movie), but he wanted the lead character role. I think he did a pretty good job, but he changed his voice to be tougher. It was okay, but since I know what he usually sounds like, his voice threw me off at first—as it did some of my friends. He’s a great actor, but it was a risk for him to play this role and I don’t know if he was totally successful, though I mostly liked him. (sad sigh)

The other characters were pretty cool. A little quibble I had was the decision to say Alice Brago (a fabulous Latina actress) was an IDF sniper (Israeli Defense Forces), when she obviously has a Spanish, not a Hebrew accent. She was great, but casting her as an Israeli was a little iffy. Another notable character is Stans, the FBI’s most wanted criminal, played by Walton Goggins, who had some crazy awesome lines. Topher Grace was the odd man in the cast, but did an excellent job—especially toward the end of his performance. Lawrence Fishburne had a limited role, but was spectacular as Noland. His entrance into the film is brilliant.

Overall, the movie was not amazing, but was a lot of fun, and if you’re a fan of the original two Predator movies, you’ll dig this one, but don’t set your expectations too high. They didn’t create a world as cool as Pandora (James Cameron’s Avatar world), but we do get to see the predators in action in this truly exciting and frightening re-launch of the Predator franchise.

Fantasy has really amazed human minds since time and memorial. We like to imagine how things would be if men could fly or if there were really dragons and knights in silvery armor suits that slays dragons. These things is what makes it so interesting that to some they even collect things that is related to their fantasies like swords and armors. fantasy swords