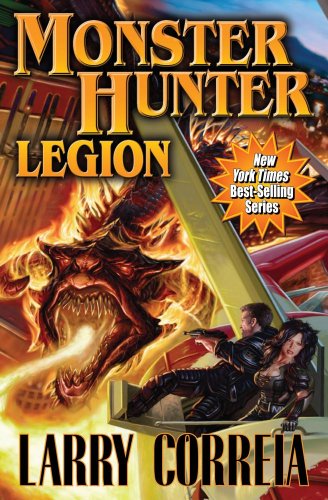 Monster Hunter Legion by New York Times Bestselling author Larry Correia is a really fun book. I read it quickly and enjoyed every minute. I’ve loved the Monster Hunter series so much and this fourth book was the next step in the ongoing evolution of the story, and the main character, Owen Zastava Pitt, also known as “Z.” He’s the Chosen One, and he’s finally accepting what that means for him and his family. Nothing is easy for Owen, but then if it were, the books would not be half as compelling. Z is by far, my favorite monster hunting accountant of all time.

The danger and excitement are off the hook for most of this novel, but Legion doesn’t start out as fast-paced as some of the other Monster Hunter books. In the opening scenes my favorite monster hunting company, Monster Hunter International (MHI: Proudly killing monsters since 1895!), is in Las Vegas, Nevada attending the very first monster hunter convention, where industry professionals from all over the world gather to talk shop and hang out. What could possibly go wrong?

Well, there are of course the rival companies at each other’s throats (literally and figuratively), and of course there is the Monster Control Bureau (the MCB), who are always at odds with the private companies, and then there is Special Task Force Unicorn, STFU. The leader of STFU, a very pale man who calls himself Stricken, is a very scary dude and he is now in charge and has decided to shape events and lay the groundwork for the implementation of a secret program called Nemesis. If his plans kill, maim, or otherwise destroy the monster hunting companies of the world in the process, then so be it. Stricken does not care about collateral damage. Fans will remember Stricken from the last novel, Monster Hunter Alpha, and the events of that book come into play in a big way.

In Legion, the worldwide spike in monster infestations is finally explained, though we still don’t know what or who exactly is driving the monsters to come out of hibernation, or why they are leaving their planes of existence to attack ours. That will be revealed in the next novel, I’m sure. Regardless, the plot of this novel is the culmination of all the other monster hunter books, and if you haven’t read them, start reading. This one won’t make as much sense to those who haven’t read the previous ones for sure, and if you’re a new fan, it’s a good time to begin, as you’ll be able to read four awesome books without having to wait that long for the next one, or by the time you finish these, the next one will be out.

The series is building to such a fever pitch and my favorite characters were all represented well in this novel: Julie, wife of Owen and a deadeye sniper; Holly the former stripper turned monster hunter; Milo the genius inventor explosives guru; Skippy the orc helicopter pilot; Ed the Orc Swordfighter; Tanya, Trailer Park Elf Princess; Earl Harbinger werewolf KING, and of course Agent Franks of the MCB. He was referred to as a “National Treasure” in Legion, and I’ve heard there will be a novel from his point of view in the future. I can’t wait for that, and think he is an extremely fascinating character.

Larry Correia is a superb character writer, and action-sequence writer, but what I love best about this series is the mix of humor and drama. It’s fast-paced action with a comedic vibe that comes out at just the right moments.

I wrote out some of my favorite lines, which end the chapters:

Chapter 2
“I said I was going back to bed, not back to sleep.” Julie grabbed a handful of my shirt and pulled me along. “Sleep is for quitters.”

Chapter 6
“Chicken theft? That's totally going on his next evaluation.”

Chapter 12
“Welcome to the smart team, Tanya . . . Now give me my marker back. You have to earn your own dry-erase marker.”

Those are some fun lines, and you get the idea about how cool this book series is. I’d also like to mention one of the most unique names for a character ever: Management. Also, there is a scene that portrays the best use of a live chicken to fix a broken helicopter ever written.

Monster Hunter Legion is the most ambitious and high-concept of all the books in the series, and fans will love the crazy ride and the break-neck ending. I’m really looking forward to the next one, Monster Hunter Nemesis.