JUST AS GOOD AS THE FIRST ONE, MORE PLEASE! 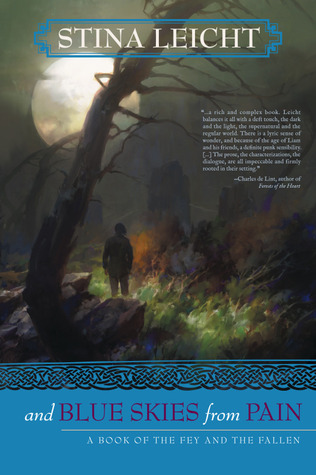 Review: of Blue Skies from Pain by Stina Leicht (no spoilers)

“And Blue Skies from Pain,” a book of the Fey and the Fallen, the sequel to Stina Leicht’s fantastic novel “of Blood and Honey,” is just as good as the first one. It started right where book 1 left off, though it does have a fascinating prologue featuring Father Murray, and covers an event that weighs heavily into this book. We get to see a mission from when Father Murray was a young man, just starting out in his order, and it involves the ongoing war the Catholic Church is fighting against the fallen angels.

Father Murray does have some point of view chapters, but the main character is once again, Liam, the former IRA wheelman and half-mortal shape-shifting fey, who has a fondness for punk music, and is quite the outcast in 1970’s Belfast, Ireland during the time of “Troubles.” This series is mostly about Liam, and he has grown quite a bit since his downward spiral in book 1, but he’s still haunted (literally) and can’t face the major loss he suffered less than a year before. He’s got a ways to go before he finds peace (and dare I say, enlightenment). I did love how the novel ended for him. There is some closure and resolution, but we want to see more.

So, the main thrust of the plot (set up in book 1) is Father Murray trying to convince his superiors that the fey are actually not fallen angels, and the Church should stop killing them indiscriminately, as they have for countless years. Liam agrees to be a test subject and prove that he, and the fey, are not demons. Of course it all goes horribly wrong, and the IRA is not very excited about Liam refusing to work for them anymore as a get-away-car driver.

The main characters are always in danger and keep getting put in situations that make you want to squirm. They get beat up a lot, and Leicht is particularly hard on her characters. “And Blue Skies from Pain” is not as dark as the first book in some respects, but the characters keep getting captured and roughed up. I think that the “getting captured” event has been a little overused in the first two books, but it always seems plausible. I’m just hoping Leicht has some other tricks up her sleeve for the next book, and I’m with an imagination like hers I believe she will come up with even more fiendish ways to make the characters suffer.

This novel did expand and go into more detail regarding the fey, Liam’s people, and touched on the fallen angel war, but there is a lot of ground left to cover. I’m very much looking forward to the next book, and think it might be the juiciest one yet, as the first two have set up a great conflict and established some awesome characters and world-building.
Some of the most notable things in “And Blue Skies from Pain” involve the new secondary characters. I’m very much hoping the American combat nuns will return, (yes, combat nuns) and that the black haired girl, who might be a selkie, will be back.

I’m a big fan of Stina Leicht’s work and very much enjoy her characters, and the fascinating world she’s created. Her vision is how I think dark urban fantasy should be done, not too much spoon-feeding of the readers, and not too much exposition about supernatural things, but with completely believable characters in tough situations.

View it on Amazon.com, or view my review of book 1.