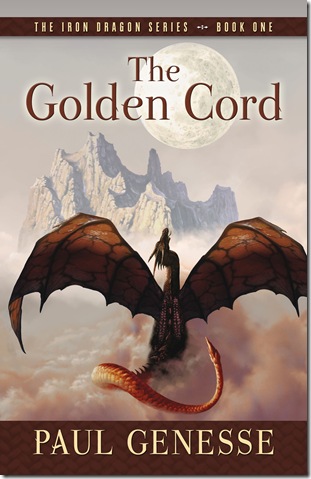 The Golden Cord, Book One of the Iron Dragon Series officially released yesterday, April 16, 2008. Honestly, it's kind of surreal to have the novel out after so many years of trying to get it published. I started working on becoming a writer in April of 1998. Before that I was just thinking about it and fighting the need that burned within. Did I want to join the ranks of books on the shelf at the local bookstore? I kept saying, no. Finally, I gave in and started the journey. Now, after nine years of struggle, I'm an overnight success. (grin)

I remember writing a few pages in April of 1999, then putting it away for a while as I helped build a block wall in my backyard with my best friend, Patrick. Nine years ago was when I started to actually put words on the page, using my first computer. Writing the whole five book series took over three years and I've been waiting for almost two years since getting a "yes" for The Golden Cord. It's been such a long journey from writing it, to selling it, to seeing it come out.

So, last night my friends at the hospital and I had a little party to celebrate the official release. I love the people I work with so much and without them I could not write novels. At the party I showed them the actual book for the first time, as the publisher sent me a few copies. It was so odd to have it in my hands a few days before. When the author copies came in the mail, I was sleeping, and my wife Tammy woke me up and summoned me to the kitchen. Still groggy, I cut open the box and there was my book. There was no applause, no fireworks, or crazy rejoicing, just me staring and rubbing my eyes. It was just weird to be looking at the book that I'd been waiting for all those years.

The reviews have been great and the response from people all over the country has been amazing. The book is finally out and the big release party is in a few weeks, on May 10 from 3-9 PM (see my web site for more details). You're all invited by the way. I should have a larger shipment from the publisher by May 10, as there would be few books at the party if I held it now. Then the day after the party I'm going on my book tour of the West. The best thing about the book tour is that I'll be seeing friends and family that I haven't seen in a long while. Writing the book has given me a great reason to reconnect with the people I love.

I want to thank everyone who has been with me on this journey, to those from the very beginning, to those who have come more recently. All of you have helped keep me going and I thank you from the bottom of my heart.

Mazel Tov & Siman Tov, that's how we say it in the Jewish parts. I'm so proud of you and so pleased with your success. I'm smiling one smile that goes around my face 3 times. You deserve all your hard-earned rewards. Much love, dude!

I am so frickin' proud of you. Congrats, Paul.