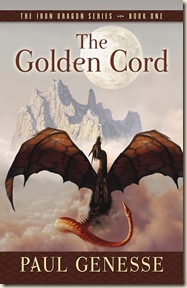 Yesterday, the publisher sent me my author copies of The Golden Cord. After so many years it's weird to hold the book in my hand. It looks fantastic and I'm excited to have it, but I didn't expect the copies to arrive yesterday.

Well, here's the review from the magazine that almost all the teen librarians in the United States read. I'm really excited about it and I'm so thankful to get such a good review from a major reviewer.

The Golden Cord: Dragons and Griffins are not the only dangers facing Clifton, a secret village in Ae’leron. The Dwarves enslave humans for their armies, forcing them into hiding. Drake Bloodstone, Clifton’s most vigilant guardian, would do anything to protect his people from Aevians and Dwarves. Ridiculed for choosing to guard instead of hunt, Drake realizes his destiny as a hunter when two Dwarves arrive in Clifton. The Dwarves seek a guide who will lead them on a quest to find their lost kin. Drake feels it is his sacred destiny to escort the Dwarves and volunteers to be their guide. After a few days, Drake discoveres the Dwarves are hiding their true purpose. They reveal that while they are in search of their lost kin, they are also Dragon Hunters and are tracking Draglune, the King of Dragons and the most Ancient Evil, who will bring a great war that will end the world. Drake knows he must do everything in his power to help stop Draglune and save his people. Book one of the Iron Dragon series is a rich and compelling fantasy full of adventure, danger, dragons, battles, revenge, magic, and more.

Readers will root for Drake, a strong character who struggles both physically and mentally with the sacred duty handed to him. Drake is becoming a man while learning to follow his heart and trust his enemies in order to save everything he loves. The plot is well constructed, the characters are wonderful, and the middle-ages setting creates an ominous feel. The cliffhanger ending will leave readers eager for more of this great recommendation for fans of Lord of the Rings.