Review of Steampunk edited by Ann and Jeff Vandermeer 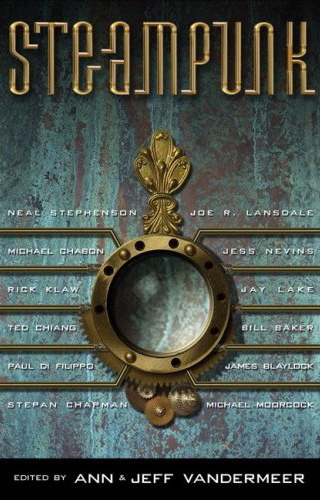 What is steampunk? Well, it’s a sub-genre of science-fiction and fantasy that is totally awesome. Imagine Victorian era elegance and modern technology with a dash of rebellion, mashed together into crazy tales about steam-driven robots, dirigibles, insane inventors, and lots of well-mannered chaps in waistcoats living in an alternate history Earth—or maybe not Earth . . .

The movie, The League of Extraordinary Gentlemen is steampunk, and the Hellboy movies have a steampunk feel to them as well.

Honestly, I had little clue what steampunk was until very recently. I was asked to write a steampunk story for an upcoming DAW Books anthology called, Steampunked. My deadline is February 1, 2010. I’ve been doing research for a couple of months now, and am going to begin the story today—after I write this review.

The anthology edited by Ann and Jeff Vandermeer is a great place to begin reading about steampunk. The introduction and essay at the end give excellent information about the genre, and the stories are awesome. Here are some of my favorite stories in the anthology:

*****Preface: Steampunk: “It’s a Clockwork Universe, Victoria” by Ann and Jeff Vandermeer. What a great intro to the genre and the book. The introduction that follows by Jess Nevins is excellent and will ground any reader in what steampunk is now, and what it was in the past.

*****Introduction: The 19th Century Roots of Steampunk by Jess Nevins. This is a non-fiction essay that goes over a ton of the seminal works and gives a history of the genre. Essential reading.

****Benediction: Excerpt from The Warlord of the Air by Michael Moorcock. What a cool story from a grandmaster in the field. The story is short and impactful and describes how a war might unfold in an alternate history Earth. Very enjoyable and a perfect place to begin the anthology.

***Lord Kelvin’s Machine by James P. Blaylock. This story epitomizes the genre and the author tells a story about a mad inventor and men trying to stop him. I found the style distant, but it was very interesting to read and captured the Victorian era feel.

*****The Giving Mouth by Ian R. MacLeod. This author has won the World Fantasy Award and this is my favorite story in the anthology. The style and the utter coolness of the strange world is breathtaking. I had to read it in one sitting and you can see right from the start that this author is a master of this craft. In my opinion, The Giving Mouth is the most powerful narrative in the entire book.

Here’s the first few lines of The Giving Mouth:

I was a child before I was your king. And even though the redbrick tower where I lived with my parents had many windows that gazed over the Pits, I was raised in what you think of as poverty. Each morning I woke on my pallet of stale straw to the scream of the shift whistle and the clang of the pit wheels. The sound was as familiar to me as birdsong, but the shock of grey light and mineral stench always came like a physical blow.
Put simply, I was a dreamer.

I need to read more stories and novels by Ian R. Macleod.


*****The God-Clown is Near by Jay Lake. What a crazy and madly entertaining story. Jay Lake is one of the most prolific and interesting writers living today. This story was extremely disconcerting and I loved every word. This is one of his Dark Town stories and I’m excited to read more of them.

***Seventy-Two Letters by Ted Chiang. World Fantasy Award winning author Ted Chiang has done it all in the short story markets, and is a master of the craft. He is a fascinating writer and this story was shockingly deep, written about an obtuse subject that kept me guessing regarding what was going to happen at the end. It was amazing that my interest was kept up through most of the story. The idea of making inanimate objects live by putting special names on them is cool, but overall, this one was a bit too long for my tastes. The story is a literary achievement with a cool character in a situation I’ve never imagined before, but it suffered from being too long and a little too hard to understand.

*****The Steam Man of the Prairie and the Dark Rider Get Down: A Dime Novel by Joe R. Lansdale. What an awesome story! This is in my top two in the antho. This tale pays homage from the old dime novel steampunk canon and makes it something fresh and new. You won’t see what’s coming, trust me. The Dark Rider is not who you expect. Oh my god is all I can say. Read this one for sure and it is not for the faint of heart. Though I’ve never met him, Joe R. Lansdale is a sick and twisted bastard, which makes him an awesome writer.

****The Martian Agent, A Planetary Romance by Michael Chabon. Pulitzer Prize winning author Michael Chabon’s story is not to be missed. He had me right from the start and I thoroughly enjoyed this alternate history tale about rebellion in an America that has never quite shrugged off the British Empire. The story is about the sons of a rebel leader and that is all I should say on the subject. Read it for sure.

*****Victoria by Paul Di Filippo is in my top three of the anthology. I saved this one for last and it was worth it. The story is big and pulls you in right from the start. The characters are well done and I had no idea where it was all going. In my opinion, this story epitomizes “steam,” and especially “punk.” There is a rebellion here on the highest levels and this story takes you to places that are extremely uncomfortable. I don’t want to ruin anything, so no spoilers here.

*****Minutes of the Last Meeting by Stepan Chapman. An alternate history tale about Nicholas II, the last Tsar of Russia. I loved this story. It sucked me in and the ideas are amazing. Nanotechnology, massive mechanized cavalry, steam driven computer minds, and much more make this one of the most imaginative stories in the antho.


There are several more stories in the book that I haven’t reviewed. Maybe you’ll find them to be even better than the ones I described? This is one of those anthologies that has taken some of the best and brightest writers in the field and packaged them up in a must read book. If you’re at all interested in steampunk, this is a wonderful place to start.

eToro is the most recommended forex trading platform for rookie and pro traders.