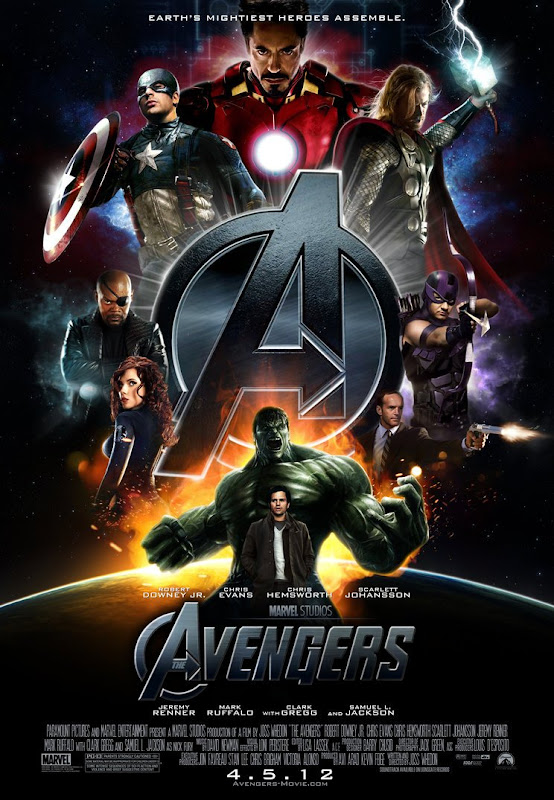 I just wanted to document for posterity my complete approval of the Avengers movie. I finally saw it on May 26, 2012, thereby redeeming my nerd-credibility. I was busy the previous weeks, but it was time to go and see this movie.

First, the movie was brilliantly written and directed by Joss Whedon. He's the man and I give him most of the credit for the movie being so good. All of the actors did magnificent jobs, especially Robert Downy Jr., as Iron Man/Tony Stark. Robert Downy stole the movie. He had the best lines, and was just so great.

Overall, the movie was clever, funny, and so much fun from start to finish. It has everything you could want, and lived up to the billing big time. I can see why it's made so much money.

My favorite moments: Hulk punching Thor, just for fun. Black Widow's line in the beginning of the movie: "I'm right in the middle of an interrogation!" Pepper and Tony's cute moments. Tony Stark poking Bruce Banner. When Captain America kicked the crap out of the aliens, and the cop then deciding to listen to his orders. Colson shooting Loki just before the end. Stan Lee's cameo, "Superheroes in New York City? Get out of here." Hulk getting his orders: "Hulk, smash!"

Avengers is an awesome movie. If you haven't seen it. Go see it in the theater. It's going to be an awesome DVD rental as well.

Paul Genesse
Author of The Iron Dragon Series
Editor of The Crimson Pact Series
Posted by Paul Genesse at 8:45 PM

My utmost favorite moment was when Loki started giving The Hulk a Shakespeare style speech about how monsters do not touch gods, and then Hulk beats him up anyways. Loki's face at that moment is priceless.