Review of Throne of the Crescent Moon by Saladin Ahmed 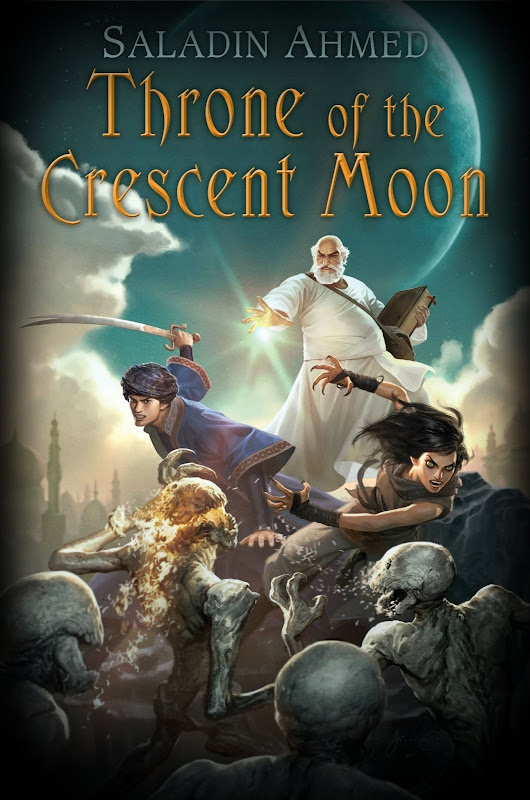 Throne of the Crescent Moon by Saladin Ahmed is a classic and delightful adventure novel set in The Crescent Moon Kingdoms—a fantastical version of the Middle-east with an Arabian Nights, or for you gamers, an Al-Qadim feel. I very much enjoyed this fun book and the well-drawn characters. You may have heard of this novel already, as it has received high acclaim and won the 2012 Locus Award for Best Debut Novel. It has also been nominated for a Hugo (award pending at the time of this review) and the author has won awards his short fiction. Not surprisingly, Throne of the Crescent Moon is smooth, the prose easy and natural, not purple or baroque in any way. In my opinion, it’s suitable for ages 11 or 12 and up, but teens and adults will get the most out of it.

The plot is very traditional, no big surprises or twists as a ghul hunt begins and the mystery evolves into something much more dire. There’s a lot to be interested in, despite the small size of the book (only 274 pages) as the setting is so different from the traditional European fantasy world we’ve all seen. These characters are great, and I’ve never read a book with a protagonist like the aging ghul hunter, Doctor Adoulla Makhslood. He’s sixty-something years old, fat, and admittedly way past his prime. None of that matters as he’s got powerful magical skills (he’s a man of God) with a lifetime of experience fighting the dark things in this rich and layered world. Despite all the evil he’s seen and battled, Adoulla has never lost his sense of humor. He is crass, bombastic, and the holy bane of his enemies’ existence. He will punch the charlatan ghul hunters in the face for their impudence, and Adoulla Makhslood is not a man to be trifled with.

The little relationships between the main characters are more than half the fun in this book, and their exchanges are priceless. Adoulla’s young assistant, Raseed bas Raseed, a brilliant swordsman of an honorable dervish order, puts up with the Doctor’s constant haranguing and teasing while fighting his inner battles over his strict moral code and the rigid system of honor.

Zamia Banu Laith Badawi, Protector of her nomadic band, is Angel Touched and can shapeshift into a lion woman (really a girl as she is only about fifteen). Zamia can wreak holy damage upon the enemies of the light, and is sworn to avenge her tribe. She is young, fierce, barbaric and is quite interested in the little paladin, Raseed bas Raseed, who knows he should not have certain base feelings for a nomad girl, for he is a man of God, and must not succumb to the urges of the flesh. Or maybe he should?

Those are the three main characters, but Doctor Adoulla’s other friends, Dawoud and his wife, Litaz also have point of view chapters. They’re experienced and have been part of the fight for decades, and are quite a good team. Litaz and Dawoud are resourceful and brave supports of the Doctor, and are not easily dissuaded by opposition or obstacles. God has given them each a specific calling in life and they must accept their fate and do their duty.

Doctor Adoulla and his friends all walk through the convoluted and crowded city of Dhamsawaat, ruled by the Khalif who sits on the Crescent Throne. In Dhamsawaat you never know what enemy or friend you might meet, or if the delicious cardamom tea you’re enjoying will be your last. The Khalif’s soldiers might arrest you at any moment, or the Falcon Prince (a lot like Robin Hood) might stage one of his spectacles to show how morally corrupt the Khalif has become. Accomplishing anything takes time and coin, and you have to know the right people, and those people have to know the right magic.

This book is a stand alone novel, a very complete story, but it is apparent that there will be much more in the years ahead from a most humble and blessed writer, Saladin Ahmed. We should all hope for more adventures in the Crescent Kingdoms and beyond, for there are many other roads to walk in this fascinating world.

View Throne of the Crescent Moon on Amazon.com