Review of The Straits of Galahesh

Review of The Straits of Galahesh written by Bradley P. Beulieu 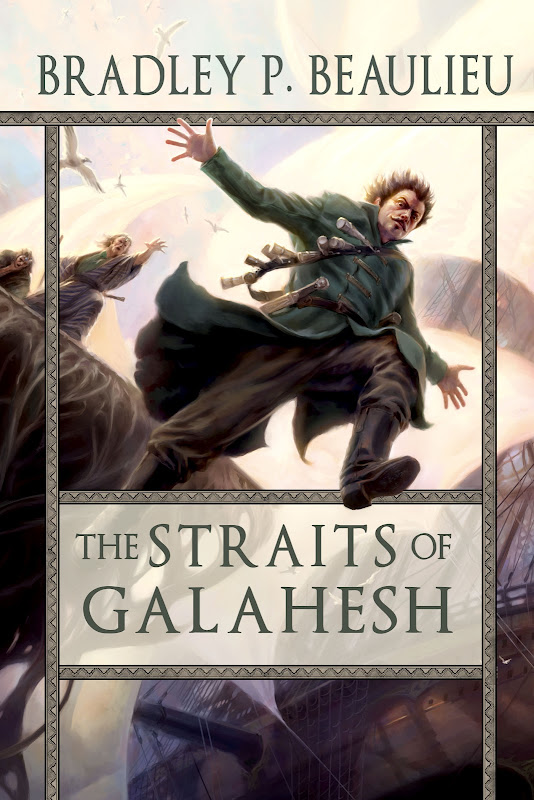 I just finished reading The Straits of Galahesh by Bradley P. Beaulieu for the second time. Wow, I love this book. It’s the second novel in the Lays of Anuskaya trilogy and is epic fantasy at its finest. The Winds of Khalakovo, book one, was awesome, and this one (set five years later) is even better. 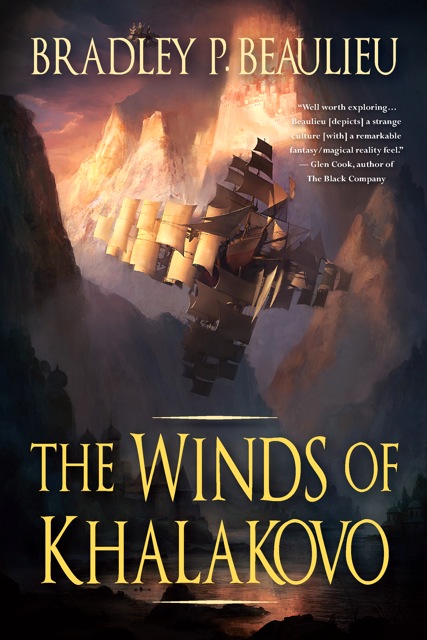 This series is a cross between George R.R. Martin’s Song of Ice and Fire series (you know HBO’s Game of Thrones, right?), and Ursula LeGuin’s Earthsea series, but with a Czarist Russian flavor.

I really enjoyed the sword fights, ship-to-ship canon battles, and all the gunfire—with muskets of course. There is also a Persian influence (The Aramahn) and in this book we get a Turkish-like culture, led by the Kamarisi (the emperor), who is the most powerful man in the world, and is the overlord of the freezing, windswept islands where the Anuskayan (Russian) culture lives.

The Kamarisi is going to crush the islanders and take over, unless the heroes are able to find a way to prevent war. There is also the problem of the wasting disease and the rifts that are opening all over the world, slowing destroying it and threatening the ley line trade routes that the windships use to navigate from island to island.

The worldbuilding is top-notch, and the strength of the setting really anchors the book and makes it feel real. The characterization seals the deal, and I was swept up in the turbulent winds that blast through this novel leading to an epic conclusion that left me wide-mouthed and in awe.

Few finales are as remarkable as in Straits. Beaulieu (pronounced: bowl-yer) writes three character threads and they come together brilliantly and go in unexpected directions. There is a serious body count in this book, and no one is safe. The large cast of secondary characters is painted expertly, making you care, then they are . . . well, killed off with gusto. Sigh.

All the action keeps you riveted to the rich, detailed, and unfolding storyline, and the fascinating world. As the book goes forward the confrontation between the Kamarisi, the Anuskayan islanders and their windships, the powerful Sariya and Muqallad who are trying to tear open the rifts, and our protagonists, Nikandr, Atiana, and Nasim build and build until the mystery of the rifts and the antagonists plans are slowly revealed.

This is an expansive story told through the eyes of three main characters. Nikandr Khalakovo, heir to the Duchy of Khalakovo is one. Atiana Vostromo, a strong woman and princess who will do anything to save her people, even if it means sacrificing her love for Nikandr, and Nasim, a teenage boy who is the reincarnation of a man who once wanted to bring about the destruction of the world.

In Straits, Nikandr is trying to stop the rifts from spreading, as they are tearing the world apart. He is a dynamic and complex character and his chapters are my favorite. He spends a lot of time on the amazing windships and I very much looked forward to Nikandr’s chapters. He is actively trying to save his islands He is in love with Atiana, and their first chapter together will leave you in shock.

Atiana is one of many strong female characters in this series. Her chapters, especially the ones where she goes into the drowning basin and her spirit wanders the aether, are incredible. In Straits she has become a Matra, and her abilities to navigate the aether make a huge difference in the book.

The third story thread belongs to Nasim. He is the reincarnation of Khamal, a master of the elemental magic, who along with his two friends, Sariya and Muguallad, wanted to bring about a tremendous change in the world. Nasim/Khamal), Sariya and Muqallad, are the reason the rifts have begun to destroy the world and it is they who have brought about the Wasting disease that has claimed the lives of so many, and ruined the land itself.

The Nasim chapters are the most challenging to understand, and the most obtuse. Not all of them are hard, but the memories/dreams that Nasim has of his previous life are purposefully hard to decipher. Luckily there are many Nasim chapters side by side, so you can understand them better and get into a flow with them before Beaulieu switches to another storyline.

The Nasim chapters are written in such a way that you will mostly understand, but this series is not spoon fed to you. It made me think hard and sometimes I had to just pass some things by and hope I figured them out later. Even Nasim didn’t understand it all, as he struggled with remembering things from his previous life as Khamal. He’s a very interesting character, and he’s like a villain who is turning over a new leaf in a new life. He’s young (a teenager) though he really has the experience of a much older person buried inside him, but he is impetuous and kind of annoying with his stubbornness at times. He doesn’t like what he did in his past life, and escaped that life to fix things that he did in this one. A hard road to follow.

Understanding this book can be a challenge, but the glossary in the back is a lifesaver. When I was stumped, I would look at it and be reminded of what I’d forgotten. There are a lot of unfamiliar names (Persian, Turkish, Russian) and they don’t stick in my mind that well, but the glossary helped a lot. Also, there is a great summary of book one before chapter one, which really reminded me of what had gone before, as it had been a year since I read Winds.

It was great being back in this world, and one of the big features in this book is The Spar, a bridge that will connect the two halves of the island of Galahesh (from the book title). The Spar made my imagination soar. It would be an awesome painting, golden light reflecting off the titanic arches that connect the sheer cliffs on either side, and the raging sea beneath.

So much of the imagery in this novel blew me away and Beaulieu is a very gifted writer, worthy of the accolades he’s achieved and all the great reviews. He’s attempted an extremely ambitious trilogy and book two delivers on the promises made in book one. The Winds of Khalakovo (link to my review of Winds) was an incredible achievement, and Straits makes it clear that Winds was no fluke.

There area a multitude of epic fantasies set in white, Medieval European settings, and if you’re getting a little bored with those, and want a flavor you’ve never had before, please check these books out. I love how Beaulieu broke out of the mold and created such a unique world. I love the cultures, the windships, the mysterious and cool elemental magic, and all of the action. Mostly, I love the characters, especially Nikandr, and Atiana.

If you’d like to take a ride on windships, see the amazing elemental magic of the Aramahn, fall in love with strong characters who drive the story, and lose yourself in a fantasy world the likes of which you’ve never seen before . . . explore the dangerous and mysterious Straits of Galahesh.


View an interactive map of the Lays of Anuskaya World here. Zoom in to learn more and watch little videos and much more, including Brad reading from his books. I've never seen a map as cool as this one.

View the book trailer or download the 15 chapter sample of book 1, The Winds of Khalakovo here. 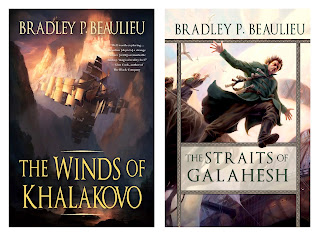