REVIEW OF WHEN ANGELS WEPT BY ERIC SWEDIN 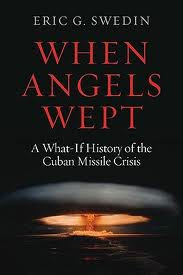 When Angels Wept: A What If History Of The Cuban Missile Crisis by Eric G. Swedin


This exceptional history/alternate history book chilled me to the core. Students of the Cold War know how close the U.S. and the U.S.S.R. came to nuclear war in October 1962, and this book describes what could have happened. The author purports to be an Australian historian writing in 1996, which is 36 years after The Fire. The book starts with a description of the failed Bay of Pigs invasion of Cuba in 1961. The Kennedy administration inherited the plan from the Eisenhower administration, and JFK never fully embraced the invasion, nor thought through the outcome. The seeds of destruction were sown in that poorly planned and thought out attack on Cuba.

When Angels Wept Eric G. Swedin is a very engrossing and readable history book. On page 167 (of 274) the alternate history truly begins. President John F. Kennedy takes the advice of his generals and launches conventional bombing raids on Cuba to destroy the nuclear missile launching pads the Soviets and Cubans were constructing. Bad weather, or one spy plane flight, done a few days later than it actually flew, could have been the whole difference in global nuclear war.

The book does an excellent job of describing the principal characters, JFK, Nikita Khruschev, Fidel Castro, warmongering General Curtis LeMay, and several others. It also describes the run-up to the conflict, especially the failed Bay of Pigs invasion, which JFK completely bungled. What I never understood before was that JFK’s mistakes during that period informed him later so that he did not make the same mistakes during those 13 days in October. In this alternate version he does make a terrible mistake and attacks Cuba, which leads to nuclear war. The U.S. did not know that the Russians had brought tactical nuclear weapons to Cuba and were prepared to use them in case of an invasion, which turns out to be the trigger for the Kennedy administration.

A nuclear attack by the Russians in 1962 was suicide for them, though Khruschev apparently did not understand that at the time. The U.S. had a far superior bomber force, and many more long-range missiles, which the excellent author, Eric Swedin points out in great detail. General LeMay was correct in thinking that it was a “good time” to have a nuclear war, as the U.S. would devastate the U.S.S.R., but the cost would still be incredibly high for the U.S. and the world. The U.S. would have been the “winner,” but mainland Europe, Britain, China, Japan, Korea, and Russia would have been annihilated. If nuclear war had occurred in the 70’s or 80’s it would have been so much worse, but even in 1962 the nuclear apocalypse would have been beyond awful.

The last 100+ pages of the book make for gripping reading and are terrifying. Reading about the war plans of both sides and seeing what the collateral effects would have been scared me big time. Also, the mention of civil war in the U.S. after the conflict and the surprising vice president who takes office in the next election fascinated me. The conclusions and the analysis of the whole situation make this book worth the read. I had a hard time putting it down and kept thinking about it when I was not reading.

When Angels Wept won the prestigious Sidewise Award and it deserves all the acclaim it has garnered. If you area student of history, or lived through the Cuban Missile Crisis, I think you’ll find this book fascinating, and horrifying.

The world came so close to destruction in 1962, and examining the potential outcomes helps us all realize how important it is to have intelligent, well-informed, and strong leadership world-wide.


View all my reviews
Posted by Paul Genesse at 11:14 AM